Home » Motivation » Blogging & The Law of Attraction: If You Build It, Will They Come?

Have you ever heard of the Law of Attraction? For those who haven’t heard of it, it may seem an outrageous concept. Regardless, whether or not you know what it is, I believe there is some value in it. Read on to find out why!

What is the Law of Attraction?

The Law of Attraction is a New Thought philosophy promoting the belief that you can attract into your life whatever you focus your thoughts upon.

The belief is built on the idea that thoughts become things. So if you focus upon positive ideas it’s likely you’ll attract positive events, if you take action towards a desired goal.

Conversely, the belief is that negative ideas are unlikely to attract positive events.

I appreciate this may sound a bit hippy-dippy, but let’s try to break it down.

Have you ever wondered why things seem to go so well for some people and not so well for others?

Perhaps you know someone that appears to have the Midas touch? Does everything they touch appear to turn to gold?

Is that person lucky? Does it seem they can never put a foot wrong?

I have met a few people for whom life seems to be like this. They are financially successful and have what I perceive to be a very comfortable life.

They pass through situations that could end badly for them and yet they survive… actually they even thrive.

Good things seem to come to them naturally without them having to even break into a sweat.

One person I know is perhaps the best example of this. I have personally witnessed his incredible financial success first-hand.

Some people likely attribute his mind-boggling success to a special degree of business acumen. They would be correct to a certain degree. However, on the road to becoming extremely wealthy I have witnessed this person:

Now I’m not saying that his wealth isn’t deserved and that it’s all down to blind luck alone. Yet he does seem to have a supernatural knack for thriving where others would fail.

How Are We Different?

As a result of knowing this particular person I have often asked myself the following question.

What is the difference between him and me?

On the face of it we are very equally matched. However, I am writing this blog post right now at 06:10 after waking up at 05:00, while he is likely still in bed with at least another hour of sleep ahead before his day begins.

So here’s the main point of this preamble.

Can you attract success ?

Field of Dreams and the Law of Attraction 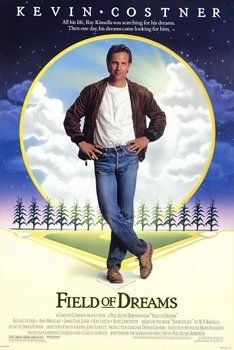 You may have read on my About page that the 1989 movie Field of Dreams has always resonated with me. It is a really charming film that you should take the time to watch if you’ve never seen it.

Field of Dreams is a film that sounds awful on paper. it’s a fantasy drama based around the theme of baseball starring Kevin Costner, when his career was in the ascent.

Costner plays a farmer from Iowa called Ray. One night he hears a portentous voice while he is in his cornfield. The voice says to him, “if you build it, he will come”. Ray hears this several times during the course of the movie.

From this, he determines that he needs to build a baseball diamond on his cornfield: watch Field of Dreams to find out why! To do this though he would be risking financial ruin.

The creation of the diamond causes the ghosts of numerous legendary players from the past to come out of the remaining corn crops to play ball. But it also ensures that the promise made by the voice comes true.

You’ll need to watch the film yourself to understand and I know that it sounds quite cheesy. Having said this it’s been compared to It’s a Wonderful Life in terms of its life affirming charm.

How does Field of Dreams Relate to this Article?

I admit it’s taken me a little while to get here, but my point relates to the frequent misquoting of the portentous voice Ray hears. The misquote is:

If you build it, they will come.
Misquote from Field of Dreams

This simple phrase has always seemed to me to be a strong metaphor advocating taking action with the aim of achieving a positive result. This equates to the idea of the Law of Attraction proposed by New Thought philosophies.

The basic idea is that you can positively influence things like your wealth, health and personal relationships by thinking in a positive way about them and actively willing them to improve.

Now I’m not sure that I believe with blind faith that the Law of Attraction works, but I totally understand it’s appreciation of the relationship between intent and outcome.

So According to the Law of Attraction… If You Build It, Will They Come?

Well of course that depends.

Let me create an example… and it may be a ridiculous example to outline the point, but I think it’s valid.

I have built this website. I will tend to it regularly devoting time and effort to it to give it the best possible chance to grow. There is of course no guarantee that it will grow in the way I want it to… or indeed that it will grow at all.

However, creating the site to begin with and looking after it over time creates a situation where my desired outcome for it to grow becomes possible… but it doesn’t guarantee it.

Conversely, if I had not built this website, it is absolutely guaranteed that I would have decreased the likelihood of my desired outcome…

I didn’t build it, so they didn’t come.

Building on the ideas of the Law of Attraction and influencing an outcome with a positive mindset (see Growth Mindset), there has been a good deal of scientific investigation into the factors that help survivors in emergency situations.

Many scientific studies have concluded that people who remain positive, optimistic, hopeful and open to experiences are more likely to survive in an emergency situation and that positive people tend to avoid thought patterns that are unhelpful in such situations

The idea of Positive Mental Attitude (or PMA) for financial success was first brought into public consciousness by the 1937 publication of Think and Grow Rich, written by US self-help author and doyen of the affiliate marketing community, Napoleon Hill.

Hill proposed that a positive mental attitude and an optimistic disposition are key factors that help to influence success.

Positive Psychologists such as American academic Martin Seligman, believe that positive thought processes have a powerful impact upon how we perceive the world around us and how we interact with it as a result.

They explain that positive thought processes increase resilience, creativity, freedom from self-imposed limitations, confidence and charisma… perhaps traits we might consider to be other contributors to success.

But Some People Are Just Born Lucky, Aren’t They!

Most of us believe that luck is a random occurrence where something beneficial happens to someone who is in the right place at the right time.

But how do we explain it when someone often appears to be in the right place at the right time and benefits frequently as a consequence?

The British psychologist Professor Richard Wiseman has researched among other things the psychology of luck. He believes that luck is directly related to someone’s ability to be open to random opportunities, even if they are not looking specifically for them.

He argues that if a person is disposed to essentially negative thought processes they are more likely to miss “lucky” opportunities that occur around them.

Wiseman also argues that there are four factors that identify someone who is lucky. His research suggests that they:

Can You Train Yourself to be Positive?

The good news for those of us with, let’s say a generally negative disposition, is that there are techniques that we can practice to help improve our potential for a more positive world view.

The ancient Chinese philosopher Laozi advised that our thoughts ultimately become our destiny. So, repetitive negative thoughts can be self fulfilling.

Conversely though… so can positive thoughts!

Supporting this ancient view, Loretta Breuning, PhD, tells us that we can develop a “positivity circuit” by spending:

So What About the Law of Attraction… and is Fields of Dreams Really Worth Watching?

Firstly, and on a personal level, I don’t completely subscribe to the idea that you can simply make something happen through your will alone, but I have no doubt at all that you can increase the chances of a desired outcome by putting your positivity, energy and belief into it.

Secondly, as I’ve discussed here, there is substantial scientific evidence to suggest that a positive outlook helps increase your chances of survival in unexpected emergency situations.

Thirdly, psychologists have suggested that people who appear to be the beneficiaries of frequent good luck are more likely to have a positive and upbeat outlook on life that makes them receptive to opportunities that arise around them.

Finally… Field of Dreams really is worth watching, but with an open mind.

Although it’s 30 years old now, it’s a very charming, feel good movie that stays with you long after the movie ends, as many people agree:

In 2017, the Field of Dreams was selected by the Library of Congress as being “culturally, historically, or aesthetically significant” and was preserved in the United States National Film Registry… so there you have it!

Thanks for reading. Hopefully you’ve found this inspiring. You can read more articles like this on my Motivation page.

Please leave a comment below and let me  know what your thoughts are on the concept of positive thinking, the Law of Attraction… and Field of Dreams!

Disclosure: This page contains affiliate links from which I may make a commission at no cost to you. See how I make money for more information.

I’ve been using WordPress to build blogs since 2005. SideGains condenses my 15+ years of experience of blogging, SEO and PPC in one place… I hope it helps YOU!

Find out more about SideGains, what makes me tick & why I started this blog.

SideGains is designed to give you the blogging tips & tools you need to create an online income outside of the 9 to 5.

Find out more about SideGains, what makes me tick & why I began the SideGains project.